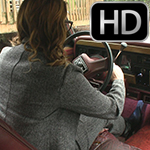 Mandie Morning Trouble in the Jeep in Suit & Boots

She’s already running behind and she still has to battle with the Jeep on this cold, damp morning.  She pumps it a bunch before spinning it over and turns the key, quickly pumping it while cranking it.  She knows it’s going to take a bit but damn, after a half dozen tries or so, seriously?!  She’s getting annoyed with it and when she least expects it, VROOM!!  She pulls it out of it’s parking spot onto the driveway and when she goes to put it in ‘Reverse’, it stalls and she’s back to having issues starting it again.  This goes on for a while, the stalling, starting and revving, which draws the attention of a neighbor.  She’s not in the mood and gets snappy with the lurker, asking him if he came to help or what?  After a few more tries, she kinda demands a ride because she’s soooo late!