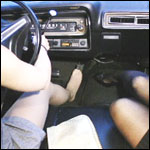 These two hot secretaries have to hurry and get to work this morning.  They’ve got a lot of work to do and can’t be late.  However, Mandie’s car won’t start!  She desperately tries to get it started but it’s too badly flooded now.  Tinsley gets behind the wheel to give it a shot but she has flooded it too!  The girls try pumping in their pumps and nylon-clad bare feet.  Looks like they both aren’t going to make it.