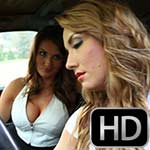 You are outside with Tinsley as she walks to the Coronet and gets behind the wheel.  She tells you to come over.  You notice she is pumping the gas pedal, flooding the car out.  She says she wants to make it hard for Mandie to start.  After some pumping, she instead decides to pull the coil-wire to make it impossible for Mandie to start the car.
You’re now in the backseat as Tinsley is in the passenger seat, taunting Mandie as she gets in behind the wheel.  From there, Mandie is desperately trying to start her car as Tinsley keeps making glances back at you while you both watch Mandie struggle!