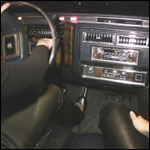 Both ladies are ready to go out and have some fun!  Dressed in some tight leather pants and stiletto heels, Tinsley gets behind the wheel of the old Caddy to take them to town.  Unfortunately, the car doesn’t want to start!  Tinsley is pumping away on the big, floor mounted gas pedal but the car only sputters a few times.  It’s flooded, bad!  Mandie even tells her she’s pumping it too much because she can smell the gas in the air.  Tinsley just replies, “I know, I love it!”  Mandie eventually slides next to Tinsley to try and get it started herself but no luck!  They eventually give up and decided to call-in some Chinese food.