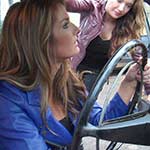 Ending the wet and chilly shoot with a video of them starting the stubborn Volvo and revving it up. Both girls just got done filming a BootsNLeather clip and before it got too dark, they wanted to play in the old cars a bit more. Mandie gets behind the wheel first, pumping it a bunch and fiddling with the choke but she doesn’t get it started. They swap and Tinsley gives it whirl for a bit and is able to get it fired up. She revs it to clear it out before Mandie gets back behind the wheel to have some fun revving it. Some exhaust shots of the tailpipe as she revs and the girls are having fun until the car starts to sputter and then conks out. The Volvo must not like Mandie or something as she can’t get it restarted before both girls decide to give up on the car.