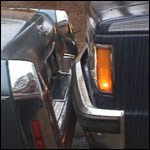 It’s a cold winters day, the snow has mostly melted and the girls have to head out.  Mandie gets in the freezing cold Cadillac to start it up and move it forward so they can take the Camaro.  Mandie can’t get the cold engine to fire up and Tinsley comes over to see if she can have better luck.  Mandie watches Tinsley give it her best effort but no dice.  They come up with a plan to just push the car out of the way with the Blazer.  Mandie goes and fires up the Blazer and brings it around back and goes bumper to bumper with the Caddy, pushing it forward.