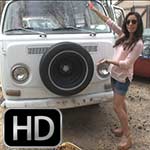 This video was filmed just a couple of weeks ago.  This is the first time Mari has gotten to use the VW Bus.  It’s also the first video we’ve done with it since it got a good bit of work done to it.  The Bus was down for a while for a carb rebuild, replaced a bunch of the seals/gaskets to stop water from leaking in and did a bunch of electrical work to it.  The key is also now in it’s original place, to the request of quite a few. 🙂  She gets in to try and start it up, which isn’t so easy.  The carb ‘rebuild’ was only to replace a few seals, so it’s still the same old carb that it’s always had.  It’s still as temperamental as ever. 🙂

One Response to Mari First-Time Cranking the Bus in Wedges