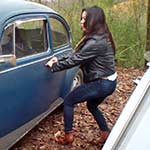 It’s cold. It’s gloomy. The Bug is being a piece of shit. It sputters, chugs, coughs, spits and splats. The end.