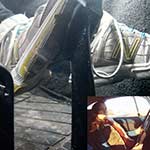 Mari Learning to Drive Stick in the Bug

The first 14 minutes is by request of a girl learning how to drive a stick. I’m riding with her, you can’t see me but you hear me giving her instruction and learning the ropes. So, if you don’t want to hear me jaw-jacking, skip ahead to 14:06 where I turn her loose in the big parking lot and she practices. She’s wearing sneakers and you have the big view on her feet, behind the pedals a bit with the small (PiP) view is her upper body and face. She stalls it good a few times where I didn’t think she was going to get it fired up again. Stalling, back and forth on the pedals, cranking and other goodies in this 26+ minute clip.

2 thoughts on “Mari Learning to Drive Stick in the Bug”