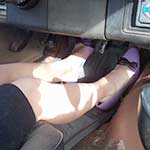 Mari Starts, Revs and Two-Foots the Camaro in Purple Pumps

This video covers a few requests.  The first is a girl doing some pedal pumping wearing shoes a size or two too big.  Secondly, Mari has never had to learn how to ‘tw0 foot’ an automatic vehicle, so, after she gets it started, she gets her first lesson. 🙂

2 thoughts on “Mari Starts, Revs and Two-Foots the Camaro in Purple Pumps”