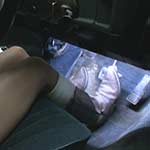 Mari Driving Us Around in Socks & Cowgirl Boots

Mari has a car full of folks…Scarlet, Hana and myself.  She’s driving us over to Cassandra’s in the Monte Carlo and tries not to get too embarrassed when the old clunker doesn’t start.  She stabs the gas pedal in her worn out cowgirl boots to get the car to start but she tends to flood the cars more than helping them to start.  She must take after her sister, lol!  After a few minutes, she gets it going and we drive and chat a bit.  She’s got some itty bitty shorts on and you get to see her bare thighs throughout the video.

2 thoughts on “Mari Driving Us Around in Socks & Cowgirl Boots”