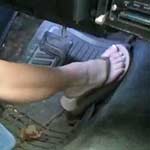 Yup, almost D-I-E-D here! Like, died as in dead…deader’n’dead!
Mari floors it from a stop sign and I’m filming her cute lil feet on the pedal without paying attention to where she’s going until it’s almost too late. She was going wide open into a curve that was at the top of a hill in a blind curve. I try to quickly talk her through it and the car dies in the process but we’re still on the road, not dead so we’re good….really really good.
Driving, almost dying, stalling, cranking and me wishing I wore a diaper. Though, I have to admit, the video makes it much less dramatic than how I explain it.

One thought on “Mari Extra Footage in Flip-Flops Custom 418”