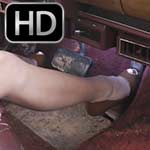 She hops in the Jeep, touches up her lips and drives us home.  But no good trip is without it’s struggle.  She’s driving the Jeep pretty aggressive when she quickly comes to a stop sign and stalls the Jeep out under braking.  Her toned legs and petite feet get to work trying to restart the Jeep which now smells really flooded.  Yay! …I mean, Oh-no.