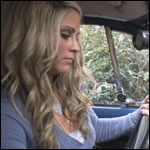 Miley is getting ready to go to her old high school friends wedding.  Her car is in the shop and has to take her neighbor’s loaner VW Bug.  She gets in and can’t get it started.  She tries calling for help but no luck.  She keeps trying but the car is so flooded that she ends up having to find another way there.