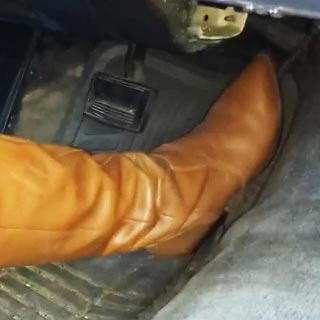 Look, despite what some sites try to tell you, not every girl has had any car trouble experience. Now, that doesn’t mean they can’t be taught what to do because, in the end, ya gotta learn somewhere and sometime, right?

Take Natalie here — she has never had any car trouble or old car experience. After battling the old ’86 Monte Carlo for a few minutes, she looks just as pro as anyone else. She gets a crash course in ‘pedal pumping 101’ in these sexy tan leather thigh-high cowgirl boots.