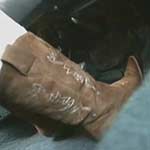 This is another clip that I found not too long ago of Nikki.  It’s filmed with that crappy mini-cam system I had back then.  She’s driving around town in the first Caddy we had and stops in a parking lot to do some hard revving towards the end.