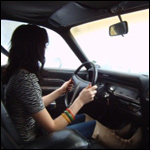 Nyxon in the Mud with the Coronet, 1 of 2

I set up some cameras in the Coronet and Nyxon is going to drive it to the gas station because it’s almost out of gas.  It had rained here a few days prior and I parked the Coronet in that sweet stuck spot.  I had already moved the other cars and told her to get it on the driveway.  It took a bit to get it started and once she got it running, she quickly found herself stuck.  This lady doesn’t give up easily and we see her trying hard to get the Coronet unstuck.  With rubber burning and smoke flying, she manages to get it out.  We then get some gas.