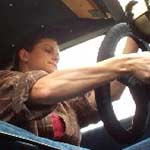 Pepper Getting Situated in the Car & Floods it on Accident

This is a requested video of Pepper getting in the car and getting her small passenger in the back seat situated.  She’s having to reach over the seats to help them and as she’s stretching back, she doesn’t realize she’s pushing on the gas pedal…more like pumping the gas pedal some.  She finally gets her passenger taken care of and goes to start the car but it won’t start.  She tries again but it just keeps spinning over.  Not realizing she’s flooded it, she starts pumping the gas and trying to start the car like she’s supposed to.  She ends up wearing the battery down and gives up to find another way out.