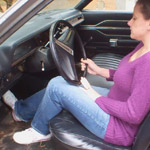 Pepper does a little revving for you guys today in a pair of white/pink New Balance sneakers.  It’s a little chilly, so getting some heat into the motor will do the body good!

2 thoughts on “Pepper Revs the Coronet in New Balance Sneakers”