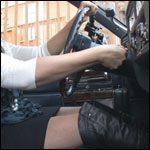 Shivering from the cold, Petra slides into the Cadillac where the ice cold vinyl seats don’t do much for warmth.  She spins the Cadillac over and you can tell that the battery is already weak, so it’s unlikely shes’ going to be able to get it started.  She’s annoyed with the car and you can tell by her dialogue and body movement.  She ends up killing the battery without ever getting much of a response from the old car.