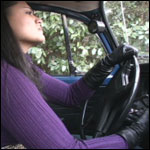 Petra is now trying to really get the car moved but you can hear and see her tires spinning as she tries backing up.  She even gets a running start but fails.  During her ordeal, the Bug stalls out and she can’t get it started again.