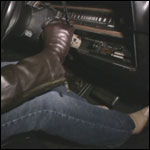 This was the last video of the day with Petra and I wanted her to try and put the Coronet on the driveway.  I love having some of these cars parked on the dirty/muddy incline at the side so that it makes it very hard to move them.  Petra is bundled up because it’s cooold out and she begins cranking the Coronet.  The Coronet takes a good while to start and even after some warming up, it still keeps conking out.  She tries backing the car up far enough so that she can avoid running over the bushes when pulling on to the driveway.  But all she gets is wheel spinning and tire smoke from the Coronet.