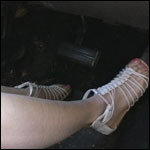 Princess steps out onto the porch to put her sandals on.  The zipper breaks on her sandals as she’s trying to zip them up.  Already off to a bad start, Princess’ problems are compounded when the Coronet decides to be difficult.  She pumps the gas pedal in her flat sandals but the Coronet is being a turd.  She ends up draining the battery trying to start the old Dodge and never gets it running.

One thought on “Princess Cranking Coronet – #173”