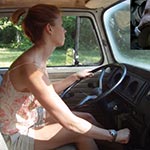 Princess is taking the Bus out for a spin in some really tall platform sandals.  She puts the pedal to the floor throughout the video and drives this bus hard!
Sorry for the shaky camera.  Was trying a new spot and it didn’t turn out as firm as I thought it would be.