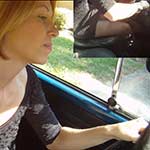 Princess Starting & Driving Around in the Bug

This is a slight compilation clip of Princess before and after filming a custom video.  She’s starting up the Bug in the driveway and then drives it to the location we’re filming an ‘out of gas’ custom video.  We then pick up with her for a short time after the custom is over with.  Just Princess being herself! 🙂

4 thoughts on “Princess Starting & Driving Around in the Bug”