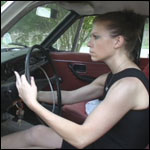 Princess Battles with the Volvo in Pumps

Princess is in a tight spot in the Volvo.  She has to battle with it to get it started, to keep it running and to keep it from rolling back or lurching forward into the cars parked all around it.  Lots of footwork on the pedals and dialogue from Princess (and the Volvo, lol)!

One thought on “Princess Battles with the Volvo in Pumps”