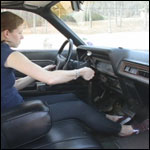 Princess has to show the Coronet to a guy who might want to buy it.  She comes out in some tight leggins, a hoddie and some Vans slip on shoes.  She goes over some details of the car and gets in to cold start it.  It takes a bit to warm up but they are finally on their way.  During the test drive, she hears something odd with the car and pulls over to check it out.  The Coronet dies in the parking lot and with a weak battery, she tries getting it restarted.