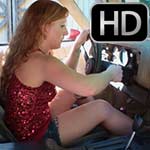 Ellie Mae just parked the Coronet back in it’s spot and now (the) Queen is going to park the Camaro.  The battery is very weak in the Camaro and it’s not starting right up, so it’s a race between her pumping the gas pedal just right to fire the engine before she loses her chance.  You can tell she’s got some experience and is no stranger to cranking old cars.  She gets it running just as the battery sounds like it’s on it’s last leg but has trouble keeping it running.   She revs it up to get some juice in the battery and to hopefully warm it up enough to keep it from stalling.