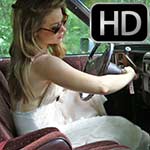 So, we’re back with Rebecca in this last clip of this series which is also the last of the Cadillac’s original engine. She’s trying to keep the engine going by pumping it really quick but it’s hot, busted and dying. It stalls out again from overheating and even though she tries hard, she never gets it started again. We let it cool for a few minutes and she talks about how I’ve given her the green light to blow it to hell and back. But since it doesn’t start, she doesn’t get to give you a glorious grand finale.

One Response to Rebecca Cranks & Revs the Cadillac White Dress & Boots, 3 of 3