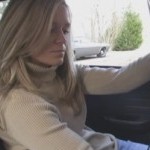 Reese Flooded Cranking the Bug in Cowgirl Boots, 1 of 3

This first clip is of Reese trying really hard to start the VW Bug.  I told her she had to pump it a lot to get it started but I had no idea she was going to flood it as bad as she did.  The angle that shows the exhaust, you can see the raw gas puddle that is dripping out of the exhaust.  I had thought about telling her to ease up but she was in her own little world and I didn’t want to interrupt. 🙂

2 thoughts on “Reese Flooded Cranking the Bug in Cowgirl Boots, 1 of 3”