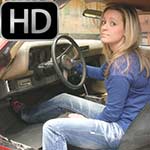 Reese has to show her boyfriends car to a potential buyer.  She answers the door and slips on her Adidas sandals to walk with you to the car.  She tells you a few things about it and you ask her to start it up.  She eagerly agrees and gets in the drivers seat to start it up.  It’s not starting as the buyer offers some suggestions.  She says it’s been sitting for a bit and she keeps at it.  After a few minutes, she’s getting chilly and runs inside to get a jacket.  She comes out in a pair of sneakers this time and gets back in to try and get the car started.  Her boyfriend isn’t going to be happy if she screws up the sale of this car…she’s pumping away, trying and trying and trying…