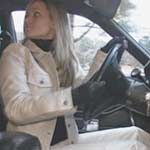 Reese Struggling to Move the Coronet, 3 of 3

Reese is still having difficulties moving the Coronet.  It’s a tight squeeze to back up this huge car between the house and other cars parked around the yard.  With the Coronet constantly stalling out on her, it keeps her on her toes.  She does manage to make it around the bend which signifies the completion of her task.  But in one last effort to make it challenging, the Coronet’s tires spin on the driveway a bit as the weight of the car on the incline makes Reese have to punch it to get up the hill.

This clip also signifies the last update we have of Reese. 🙁

One thought on “Reese Struggling to Move the Coronet, 3 of 3”