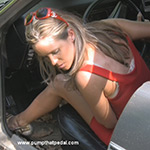 Reese Road Raging & Gets Stuck in the Mud

Reese gets stuck behind a slow driver while she’s in the Dodge Coronet.  She’s getting more and more irritated that this lady is just putt-putting around.  Her road rage gets the best of her when she follows the slow driver, who is in an SUV, down a dirt road.  Reese realizes that this isn’t worth it, stops and tries to back up but it’s too late.  She’s stuck in the mud!  She tries her best to get the old car backed up but the road is very soft and she’s just flinging mud everywhere.  She spends the rest of this video rocking the car, working her way out inch-by-inch and just when she’s almost home free, the car stalls and she kills the battery trying to get it started again!

**This is a remastered clip that I’ve been meaning to update for quite some time.  I originally filmed this clip in 24p, which requires special steps when editing that I wasn’t aware of at the time.  While it is large in size, the quality difference from the old clips is substantially improved.  I’ve deleted the old 3 part series from her pages.**

One thought on “Reese Road Raging & Gets Stuck in the Mud”