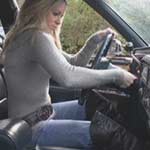 Reese Assaults the Caddy in OTK Boots, 1 of 2

After this video was done, the Cadillac and the spot where the car was parked, were never the same.  She assaults this Cadillac with those pointy-toed, stiletto leather boots and makes it submit to her demands to start.  It talks back and puts up a fight but she does win near the end of this first clip.  She never speaks a word, she just issues her commands to the car via her right foot and hand.
This video is a reminder to any other cars who dare oppose this girl, you will pay!  It’s also a reminder to her loving fans as to why she’s one of the top pedal pumpers to have ever pumped a pedal.  No hype, just facts.

2 thoughts on “Reese Assaults the Caddy in OTK Boots, 1 of 2”