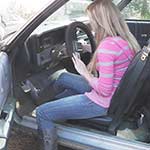 This is the day after Scarlet got the Monte Carlo unstuck but not without some damage to the exhaust.  That’s why it’s all crookedly parked when Renee goes to start it up.  I got the exhaust taken care of and I want Renee to move it on the driveway.  It takes her a little bit of work and pedal pumping to get the Monte to start.  She backs it up and then parks it on the driveway to do some revving in those cute gray boots she’s wearing!