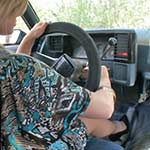 She’s cranking the car when the video fades in. Looks like she broke down. She tries it a few times before getting out of the car and opening the trunk to get a small emergency gas can. Looks like she’s ran out of gas a few times and is prepared. She adds the little bit to the tank and gets back in the car to try and get it started now. She’s cranking it for a while and still nothing. She stops for a second to see if she can call someone to help her but not Miley, she’ll just make fun of her. So she calls mom (Sugarmomma) but the damn signal cuts out…come on!
She tries starting it again and after a few more tries of it not starting up, she takes her shoes off and rubs her pantyhose covered feet together for a moment before going back to pumping and cranking to get her piece of crap going! Ah, finally, sputtering! Yes! She works it some more and the car finally starts, yay! Now she needs to get to a gas station quickly.