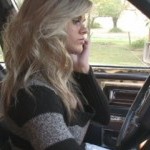 Riley is ready to head out but the Cadillac won’t start.  She tries cranking it on her own but finally decides she needs to call someone for help.  She listens for instructions and repeats what she’s being told to do.  She keeps at it and finally gets it started.