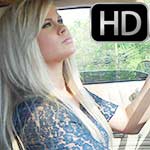 Nothing but a passenger seat view of Riley as she works those pedals driving the loud, rumbling Camaro around.  Her petite frame, tanned legs and pretty painted toenails alone make it worthwhile to stare.