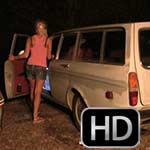 She’s heading out to a late-night BBQ and her car doesn’t want to start.  She cranks for a while before finally getting it started and proceeds to rev it up lightly to warm it up.