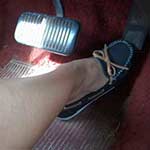 Going back to the Monte Carlo now to see if it’ll start. She’s driving the Jeep in these loafers on the way there and when we get there, the Monte’s starter just sounds shot. So she gets back in the Jeep, kicks off her shoes and drives us back. We’ll have to get the Monte later…