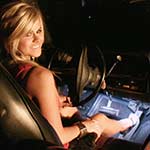 Riley has a little flirty fun revving the Coronet up for you.  She romps on it now and again with her flip flops.  Just some sexy fun revving from this little cutie!!