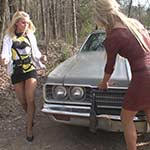 Thinking this road is the shortcut, Riley takes a sharp right and stalls the car in the process!  Now the girls are lost and stranded in a creepy area.  Riley tries getting the car to start but no luck.  They get out to look under the hood but neither really knows much about cars.  Barb decides to give it a try and her luck is the same as Riley’s, bad!  She can’t get the car to start and the battery is getting weaker and weaker and….it’s dead!