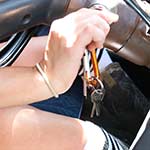 This first clip is Riley trying to leave in the old 1986 Chevy Monte Carlo but can’t get it started. She’s got these tall vintage cowgirl boots on with some knee high socks and daisy dukes. This entire first clip is her trying and trying hard to crank this old clunker!

One thought on “Riley Floodes the Monte Carlo & Needs Scarlets Help, 1 of 2”