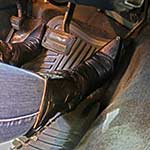 Riley is still having a hell of a time at getting this Monte Carlo cranked up. It’s sputtering and chugging a lot but seems to be getting more flooded and not less. Scarlet hears the issues she’s having and comes out to offer her expertise. She gets it started and revs it up some to clear it out to make sure it’ll stay running for Riley.
*Sorry for the exposure settings for part of this video.*

One thought on “Riley Floodes the Monte Carlo & Needs Scarlets Help, 2 of 2”