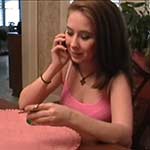 This is a good example of how this pedal pumping fetish is born.  A cute girl is supposed to be watching the kid but instead goes for a spirited drive in the car.  Flooring the gas, driving too fast and all in her bare feet!  So much fun…except when she gets the car stuck for a bit…oops!  How would she explain that if she wasn’t able to get out?  Good thing she did!