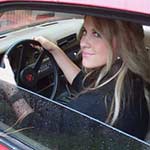 Rockell Starbux Pumping the Camaro in the Rain, 1 of 2

It’s cold, it’s raining and Rockell is going to start the 77 Camaro.  She definitely has her hands and feet full trying to get this started today.  She keeps at it, working the gas pedal and trying to have the car go from sputtering to running smoothly.  She does some long cranking and almost kills the battery before the car finally starts.  When it is running, she revs it up and has a little fun with it.

4 thoughts on “Rockell Starbux Pumping the Camaro in the Rain, 1 of 2”