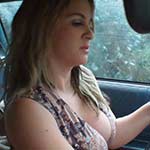 We have limited parking space at PTP HQ.  So we tend to park cars in little nooks and crannies to make it easier for Scarlet and I to loop around the driveway when they aren’t in use.  There’s a spot that fits any one of the cars perfectly but it’s where all the water likes to collect and is a very damp spot that makes it hard for any car to get out.  I like parking a car there and on rainy shoots, have the model try to pull out.  Rockell falls victim to this muddy trap this time…enjoy!

One thought on “Rockell Starbux Stuck in Strappy Sandals & Rain Boots, 1 of 3”