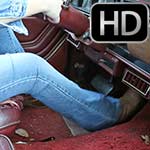 Time to get back in the Jeep and give it some revs to get a charge flowing to the Monte Carlo’s dead battery.  She romps on it hard with her cowgirl boots, making that Jeep’s engine scream in pulses!  She then goes back to the Monte Carlo to try it again, giving it some good, firm, to-the-floor pumping before and during cranking but it isn’t enough.  The battery keeps dying and even though she gives it a pause in-between some times, it’s so dead that it doesn’t charge enough to even spin the engine over.  Fuck it, she gives up and wraps it up so she can leave, she’s already late.  She backs the Jeep up to turn around and stalls it out and now it won’t start back up…what the hell?!

One thought on “Rockell Starbux Cold Starting Dilemma in Denim & Boots, 2 of 3”