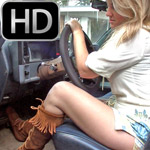 Rockell has on this itty bitty retro dress with some knee high moccasin boots as she heads out to do some pedal pumping.  She first starts with the Monte Carlo.  It doesn’t want to start, even with her sweet talking and begging it.  She then moves to the Blazer, which gives her the same thing…nothing.  Her last chance is in the VW Bus.  She climbs in the drivers seat, gives it some quick pumps and turns the key…success!!  She gets all excited and begins revving the bus aggressively.