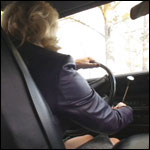 She still can’t get the damn car started this morning…she’s going to be so so late!  Lots of begging the car to start, she NEEDS to keep this job!

One thought on “RockettGirl Late for Work, Car Won’t Start, 2 of 2”